How to build a React dashboard three different ways 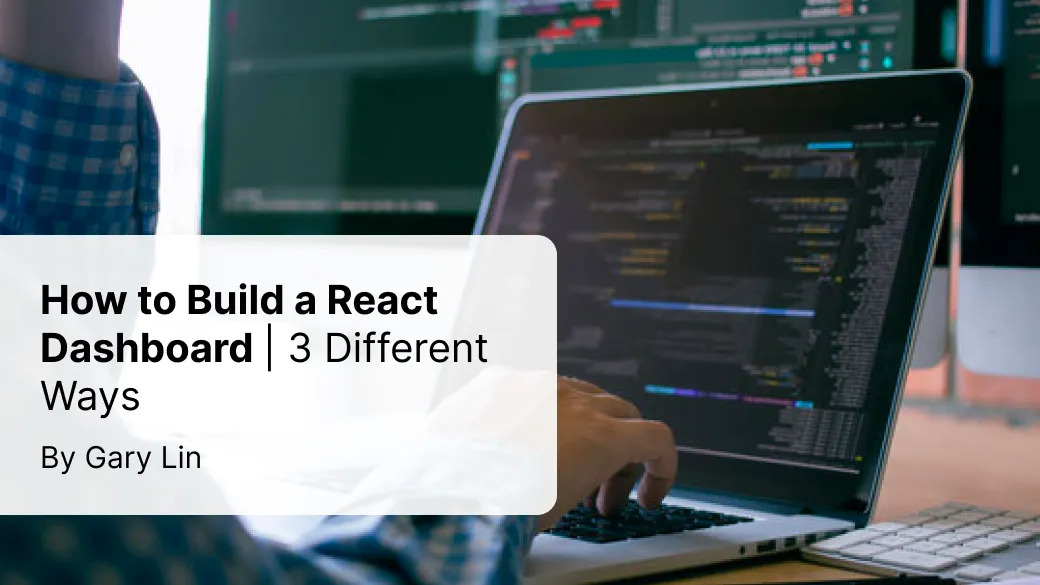 Pros and cons of 3 methods to build a React dashboard

Dashboards are an important feature of web applications today. Most modern SaaS applications ship with some sort of analytics reporting. Users love seeing data summaries, graphs, and pie charts irrespective of the application's domain or target market. Customizable dashboards that users can tweak and design to highlight what matters most to them are even more popular. If your web app is built on React, here are a few ways to build out a React dashboard for your users.

Not too long ago, web developers found dashboard building to be cumbersome and tedious. They had to render all the dashboard HTML on the server and then make it dynamic with jQuery and other programming hacks. In addition, application backends were monolithic, with too much functionality, including analytics processing built into them. This often made dashboard processing slow, inefficient, and hard to maintain.

Thankfully, modern advancements in software development have made dashboard designing faster, more efficient, and much more fun! The latest UX technologies combine with containers and microservices so that developers can quickly plugin and customize the dashboards they require. In this article, let's look at several ways to build a React dashboard that works!

React is a Javascript library for building interactive UIs. You can use it to create simple application views that update automatically when the data changes. React code is easy to write and debug because it has several features that support modern UI design. For instance, React is component-based, which means that you can use Javascript to write components and combine them to make more complex UIs. React components take in data and return the web page for display; thus, your data and display logic remain independent from each other.

Why implement a React dashboard?

Dashboards are dynamic, which means that their content changes for every user visiting the application. Dynamic content often slows down application performance, especially if the methods used by the server to display the content are inefficient. React was designed to make rich, dynamic UIs that do not compromise performance. Some benefits of using React to make your dashboard include:

React has a feature known as virtual DOM. DOM or Domain Object Model refers to the HTML code that tells a browser how to display your dashboard. Your virtual DOM in React is a representation of the actual DOM. Your dashboard data is collected, created, and tweaked in the virtual DOM before being converted to the final dashboard your visitor sees. As virtual DOM remains in internal memory, application processing speed remains high.

Easy to learn and use

React has high-quality documentation, tutorials, and training resources so developers with all experience levels can learn it quickly. It is written in JavaScript, so familiarity with the language also makes learning React faster.

Dashboards made in UI are easier to test and debug. React is compatible with several debugging tools that improve the quality analysis (QA) process. Apart from that, React dashboard code encourages modularity with every function doing one task. For example, your DOM components would manage a specific aspect of the application, while virtual DOM manages another entirely different aspect. The modular design prevents code redundancy so that you find bugs faster. Customers get a great product from the start!

Once you are ready to build your React dashboard, you will need to think about how it will look. Here are five questions to ask yourself before you actually start building.

Let's look at three different ways you can make a React dashboard!

Instead of coding everything from scratch, you can use a React component library to make your React dashboard. There are several paid and open source component libraries out there. The library creators have done a lot of the hard work for you. You just have to figure out how to integrate the library into your existing codebase.

For example, you can use a library called KendoReact. KendoReact has a TileLayout component that offers a two-dimensional CSS Grid. You can use the grid to render dashboard widgets in a grid layout with minimal coding effort.

React UI frameworks are also component libraries. However, the difference is that a UI framework follows particular design principles in all its components. All the React Components tie up logically under a broad umbrella of best practices and UI research.

For example, Material UI is a React UI framework based on Google's Material Design - an adaptable set of guidelines and tools that support the best practices of user interface design.

You can install MaterialUI to get a dashboard app to prototype new dashboards using drag and drop functionality. You don't have to reinvent the wheel as you get several examples and templates out of the box.

Embedded React dashboard solutions are better than the previous two methods because almost all the work has been done for you. Component and framework libraries still require a lot of coding and design from your end to get everything to work. Using them for your React dashboard is comparable to assembling a car from various parts. You get a lot of options in terms of the engine, brakes, etc., but you still have to make the final product. On the other hand, embedded solutions are more like a pre-made car model. You can customize it for color choice, interiors, etc., but a working machine is ready for use!

For example, Explo is an embedded dashboard solution that can reduce your development time from months to just a day! All you need is basic SQL knowledge and the ability to paste some code.

How to build a React dashboard using Explo

That's it! Non-technical users can achieve this easily, and you don't need an ongoing development team for maintenance either. Anyone can iterate and update React dashboards using Explo's version control system and drag and drop interface.

Learn more about how to build a React dashboard and how Explo can help you by booking a free demo with our team oday!

Why Customer-Facing Analytics Is a Developer Problem?

How to Create Real-Time SQL Dashboards